By Brandon Butler, Director of Information Policy for the UVA Library. Follow The Taper, Brandon’s blog, for more on the Big Deal and other copyright and information policy issues.

Last week the University of California system (the UC) made a remarkable announcement: they are not renewing their “Big Deal” subscription with Elsevier journals. Elsevier will cut off all UC campuses’ access to post-2018 articles any day now. (Past subscriptions included perpetual access rights, so most articles published before 2019 will still be available to UC researchers.)

Here are six things UVA researchers need to know about the UC’s decision:

A lot of press coverage has emphasized the UC’s demands around open access (more on that below), but it’s fairly clear from their public statements that what really broke the negotiations was their equally strong insistence on containing the runaway cost of the “Big Deal.” Like big cable TV bundles, journal Big Deals were first sold to libraries decades ago as a way of getting access to more content for less money. But the value proposition has not held up. Over the last two decades, costs for journals have far outpaced both inflation and library budgets, and that explosive growth has crowded out other resources. Mergers and acquisitions have resulted in a few oligopolies who dominate elite scholarly publishing; library collections investments now go disproportionately to this handful of massive firms, with Elsevier in the lead.

2. Big Deal prices are artificially high, while their value is decreasing.

Vendor profit margins are astronomical – 35% and up for the main Big Deal purveyors. Elsevier’s profit margins exceed those of both Apple and Google. Vendor profits at this level can only reflect monopoly power grounded in copyright and prestige, not real value added by the vendor. A landmark study comparing prices charged by for-profit vs. non-profit vendors found for-profits charge substantially more, even adjusted for citation rates and other proxies for “quality.” And, again like big cable TV bundles, journal bundles are chock full of filler content almost nobody reads, but that the vendor touts as evidence of value. (Look at the data we’ve recently published showing how much of our Big Deal content is consulted less than once a month, and the startling number of titles that are never read at all.) In reality, bloated Big Deals are providing less value today, charging more and more for the same fraction of literature we use and hiding costs behind mountains of unread and rarely-read content. 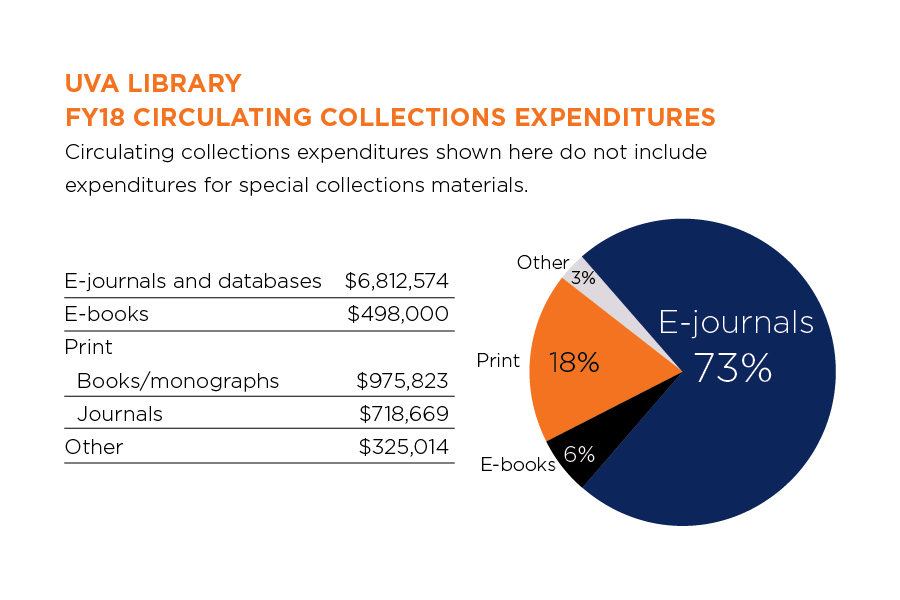 3. Like all libraries, UC is sick and tired of paying three times for journal literature, only to see faculty work locked behind paywalls.

UC was concerned about cost, but they also walked away because Elsevier would not accept a “transformative” deal that would have made future UC faculty research openly available to the world rather than locked behind paywalls. That proposal is an attempt to escape the dominant publishing paradigm, under which universities pay at least three times for journal articles, only to see that knowledge locked away and monetized. First, universities pay faculty who conduct research and write articles as part of their employment, a major subsidy to vendors, who do not pay their authors for the articles they publish. Second, faculty also edit and do peer review as part of their university duties, again without compensation from vendors. Finally, universities must pay vendors to buy access to the final articles, which were created, edited, and curated by our own faculty.

Indeed, if we assume that each article Elsevier publishes accounts for an equal portion of its profitability, the profit attributable to UVA-authored articles last year was ~$2 million, roughly equal to what we pay for access to Elsevier journals. Given the high quality of UVA scholarship, and the additional free work contributed by UVA editors and peer reviewers, this estimate of UVA value donated to Elsevier is probably much too low. No other enterprise could be run this way.

And the paywall system hurts faculty as well as their home institutions. Faculty experience reduced reach and impact when their articles are paywalled, and they can’t even share their own work online without fear of publisher takedowns.

4. The UCs tried to fix the vendors because the prestige economy is so broken.

Perhaps the most conservative thing about the UC’s proposal was that it would have made UC faculty work open access without disrupting the existing system of journal prestige. More than any other factor, promotion and tenure processes that outsource evaluation to journals ensure a steady flow of free content to Elsevier and other Big Deal vendors. The primary reason faculty give away their valuable copyrights (and their valuable time) to for-profit journal vendors like Elsevier is that the academy has vested particular journal titles with prestige by making placement in those outlets an important credential, implicitly (or in some cases explicitly) required for promotion and tenure. It doesn’t have to be this way. Over 1,000 institutions and nearly 14,000 individuals have signed the San Francisco Declaration on Research Assessment, which offers an alternative vision for evaluating research, one that disrupts the cycle of prestige that keeps research flowing into vendors’ hands. The National Academies of Science is also investigating ways to create better alignment between incentives and open practices. Individual scholars have also proposed compelling alternatives to the status quo; a local example is the “Scientific Utopia” (Part I, Part II) proposals co-authored by Brian Nosek and Jeff Spies.

5. The UC’s walkaway is just the latest (and largest) in a trend of recent Big Deal breakups.

As you can see on the SPARC Big Deal Cancellation Tracker, UC is as much a continuation or culmination of a trend as a trend-setter. Domestically, Florida State University is a recent high-profile example of an institution rebelling against the Big Deal. While they didn’t walk away, they did cut their spending in half, and used the savings (more than $1 million) to acquire much of the backlog of material that faculty had specifically requested in recent years, but that Big Deal prices had crowded out of the collection. In other countries, where negotiations often take place at the national level, walkaways are even more common. Germany and Sweden both walked away from Elsevier last summer. A consortium of 250 research institutions in France cancelled their Big Deal with Springer last year and repurposed that money to invest in open access. More cancellations and break-ups are sure to come.

Researchers don’t pay directly for journal access, so you don’t necessarily know its cost, the financial models that support it, or the tradeoffs and sacrifices involved in acquiring it. Libraries don’t always know enough about how resources are used, which ones are most valued, and (most importantly) which trade-offs would be acceptable to researchers. The Library has begun these conversations with Deans, the Provost’s office, and the Faculty Senate, and we look forward to talking to more members of the University community as we move forward with our own rethinking of Big Deals. We’ve also started disclosing some of the data we have on the cost and use of our collections. Watch these pages for more such disclosures in coming months.